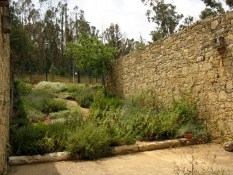 To start, the studio designated for Silva and Hawke’s Orange Work (OW) collaboration was, although architecturally connected in series to the Steam Shop’s other chambers, nevertheless distinct in several respects. By the dominant flow of Lugar Comum’s users and visitors, the assigned space, being at the north end of the building, was sequentially first in order of the public’s approach to the project site. Also, the chamber suffered the most significant damage of all the Steam Shop rooms from the ruinous blast of 1973, with it’s doorway and heavy outer walls reduced to half the height of the building’s other walls.

Finally, in distinction to the more “authentic,” albeit stabilized, ruins of the other rooms, on the hillside at the rear of the designated studio, a garden of aromatic plants and flowers, complete with wandering pathway, had recently been constructed. 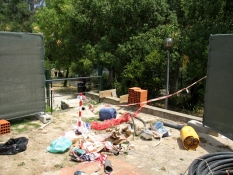 The “edge” position and the greater visual transparency of the ruin, suggested at the outset that the studio (and so the artists’) practice might exist somehow separated from the viewer’s experience of the greater project. By defining a space in opposition to the other spaces, symbolically outside, it was thought a contribution might be made to the brief of re-examining Courbet’s artist/public formulation within a repurposed factory. 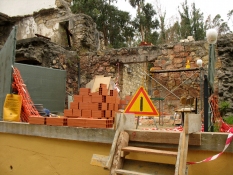 Functionally, it would also ameliorate the immediate problematic for the OW collaboration; as the essential animating principle of their work heretofore had been the act of seizure of public space rather than working within a specified curatorial designation within an institutional frame. A problem compounded by the discursive perfume of the garden which radiated security and stability. 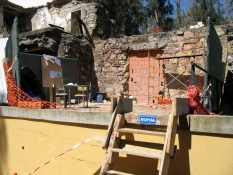 An initial decision was made to problematize the site’s appearance as art, and instead to create the appearance of an active construction site, appropriating the role of institutional maintenance, and making an ambiguous situation as to whether the ruin was being de- or re- constructed. Building site rubbish was collected and naturalized into the site, accompanied by borrowed construction equipment of scaffolding and barrier fences. At the time of the first public event, the entrance was barricaded; only the worksite in front of the studio, a reconstituted yet further exteriorized room, was accessible to the public. 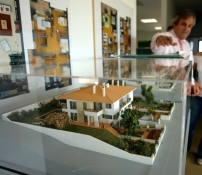 For the second half of the project’s duration it was clear that the artists had to move beyond the suggestion or representation of a practice of enforced exteriority and actualize that implication. Consequently, the entrance to the studio space was closed with bricks, mirroring the landlord’s practice of sealing a vacant building to prevent the occupation of squatters (or occupa), thus rendering the space defunct. Taking this logic further, it was decided to enact a displacement, moving the locus of the work to a nearby real estate construction site, and presenting the Steam Shop public with directions and documentation of the new location. 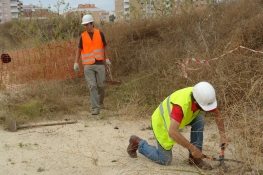 Research was conducted, under the false pretenses of a prospective buyer, on the nearby Oeiras Golf and Residence luxury housing development, which, according to it’s sales agent provided every sporting amenity with the exception of football. This was significant, as on the streets of the adjacent Sao Marco housing development, groups of immigrant youths played football on empty streets. The Oeiras development had used the manicured space of the golf course as a de facto barrier to the Sao Marco development. A possiblilty of spatial agency was then realized, with a vacant plot of the golf development detournéd to create a small football pitch, and the unauthorized nature of the action confused by signage baring the Oeiras Golf logo, welcoming users to the pitch. 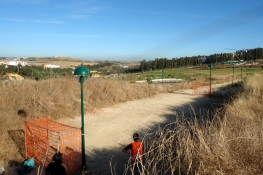 The response then to the Steam Shop brief was to employ a site/nonsite relation to vivify the connection between studio and site, artist and public. 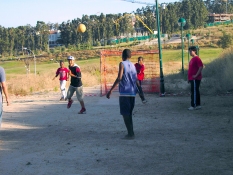