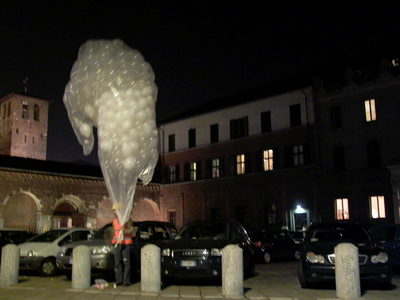 My work began in on site landscape painting.  Over time, the performative nature of the artist in public space, combined with the what I perceived to be a failure of an optical approach in adequately representing a landscape led to a more conceptual landscape model, where spaces were seen not as only as constructions of colors but as snarled vectors of interest-- and with art having an unusually effective intervening capacity.

From 2003-2014 I made architecture and sign interventions in public spaces, employing the principle of 'productive confusion' in a sometimes collaborative project entitled Orange Work, that combines symbols of authority with novel forms and messages.

In terms of formal education, I studied Ancient History at Colby College and went to graduate school at Pratt Institute for an MFA degree, and an MS degree in Art History (with a thesis on Robert Smithson’s environmental antagonism) in 2002.  In 2005-2006, I participated in the Whitney Museum's Independent Study Program.

I showed for some years at the MIchael Kohn Gallery in Los Angeles, as well as at Apex Art, the Abrons Art Center, Anthology Film Archives, Art in General, Creative Time, and Eyebeam (all in NY), as well as at the Institute of Contemporary Art (Philadelphia), the Irish Museum of Modern Art (Dublin), the Centro Cultural de Belém (Lisbon), Pallant House Gallery (UK), the Riccardo Crespi Gallery (Milan) and at G-MK (Zagreb).  Proceeding and during the Occupy Wall Street events in New York, I collaborated with activist collective Not an Alternative and worked to create a visual language of protest that could effectively contest politics in spatial and mediatic ways.

I have presented my work at the New Museum of Contemporary Art, PS.1, the New School’s Vera List Center, Exit Art, and at the College Art Association, and have been reviewed in the New York Times, Flash Art, Architect’s Newspaper, the Radical History Review, the Brooklyn Rail, and rhizome.org.